You are here: Home / Homeland

WHERE SHEEP FARMING HAS EXISTED FOR THOUSANDS OF YEARS

An island just begging to be explored

Sardinia is a treasure trove of history going back a thousand years and is home to a remarkably rich heritage, its landscape still strewn with evidence of the multifarious vicissitudes of its past. Its strategic location in the heart of the western Mediterranean has meant it has always been something of a magnet, drawing a succession of different civilizations to its shores, each leaving its mark: from the evocative nuraghi to the various monuments, from beautiful cities to picturesque little towns and villages. You can still find all these vestiges here today, just waiting to be explored, together with awe-inspiring nature, an unforgettable coastline and a breathtaking landscape: a wonderful collage of sea, land, rock and high mountains. And if that weren’t enough, it all comes with the bonus of a mild climate and exceptionally varied flora and fauna, enriched by the expressions of its people, its traditions, the folklore, costumes, artisan practices, flavours and fragrances of the produce of this generous land… 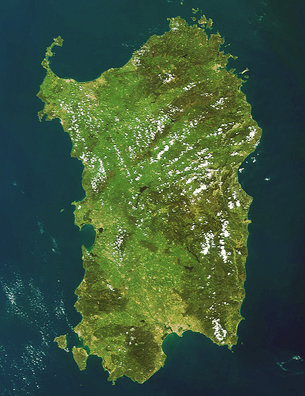 Sea, coast, plains, hills, mountains, rivers. A wonderful boxy four-sided island surrounded by a legendary sea, Sardinia stretches roughly 260 kilometres top to bottom and measures 120 across. Its coastline features four capes marking the island’s four extremities – Falcone in the north, Teulada in the south, Comino in the east and Argentiera in the west – and is an impressive 1,850 kilometres long, while four large gulfs – Asinara, Cagliari, Orosei and Oristano – one on each side, open up to the sea. A stunning medley of high rocky cliffs and amazing white sandy beaches, the Sardinian coastline stands out for its generous helping of caves and, in the Gallura region, deep funnel-like inlets. Inland, on the other hand, the island is prevalently hill country interspersed, to the west, with two large plains – Campidano and Nurra – and with mountain ranges, including the island’s most imposing massif, Gennargentu. Sardinia is home to three rivers worthy of the name: the Flumendosa, the Coghinas and the longest, the Tirso, which has been dammed to create Lake Omodeo, the largest artificial lake in Italy.

This article is also available in: Italian